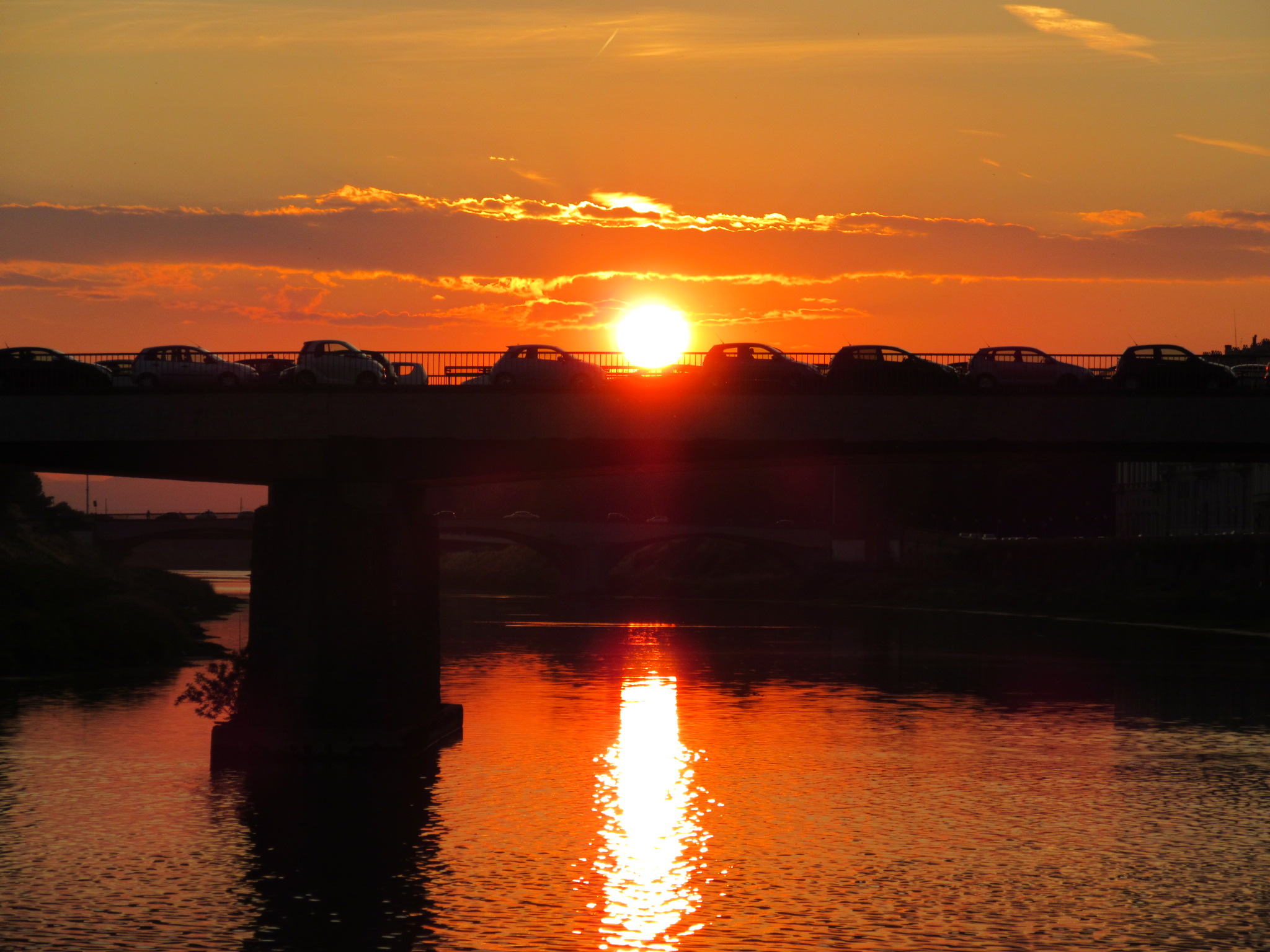 eat, breathe and fall in love in: florence

[dropcap]W[/dropcap]ith our one year anniversary approaching I have been missing Italy more and more.  Soon after my husband proposed we started talking about wedding plans.  I immediately got stressed out thinking about them.  I always thought I would want to get married in Detroit and get married outside.  There are not a ton of venues in the actual city.  It would involve event tents, caterers, tables and chairs being rented, hiring music, seating charts….. AGHHHHHH!  NO THANK YOU.  I remember the night after he proposed thinking about all this stuff and already starting to freak out.  I never saw myself having a wedding in a wedding hall, it’s just not for me.

We both really wanted to go to Italy for our honeymoon but to spend thousands on a wedding and then thousands more on a honeymoon also didn’t make sense.  So we killed two birds with one stone and did both there.  We planned two weeks in Italy starting with our wedding so we could be with our guests in the beginning and then part ways and head onto our honeymoon.  We visited Sorrento, (hands down one of the best places a girl could get married!) Rome, Florence and ended in Venice.  Each city had it’s perks but the one we loved probably the most or said we would definitely go back to is Florence.

We had been working with a travel agent (Amazing Vacations by Lynn, and she is AMAZING!) to help us plan our trip for us and our guests and we told her we didn’t want to pack up our itinirary too much.  We had a travel routine down by this point.  When we traveled together we usually woke up by 8 or 9, figured out what we wanted to do for the day, came back to our hotel by 5 or 6, took a shower and a cat nap and then usually headed out by 8 for dinner and whatever else the night led too.  We didn’t want to much rigor and planning.  I like being able to explore cities on our own.  So for Florence when we left the United States all we had booked was our train ticket.

Florence is an old city with so much culture.  When we first arrived we checked into our hotel and immdiately started to wander.  We stayed about a mile outside of the city center and walked into town.  We chose to walk along the River Arno which had great views of the city.  There were several bridges across the river (going into our trip I thought there was just “THE” bridge – the Ponte Vecchio) but soon found out there were several.

We wandered around and stopped and got gelato and wine and just strolled for the day checking out the city.  We knew we had to check the sunset out so we went back to our hotel to shower and get ready and then head out to catch the sunsets.  The sunsets in Florence are beautiful.  What sunsets aren’t?  The sun starts to set and dips down below the bridges and turns this bright dark orange color making for the most picturesque views.  We did not miss a sunset the whole time we were there.

We did some of the touristy things that you would do in Florence.  We went to the Duomo (dome) which is the dome atop of the Florence Cathedral.  Not only did we go in but we climbed up.  We got to go all the way to the top and walk around the inside of the dome and see all the beautiful murals that are painted on the ceiling.  We then kept climbing through small hallways and staircases (I am not going to lie, I was super claustrophobic) to the outside observatory where we could see the whole city.  The views were unbelievable.  You could also hike the stairs to the top of the bell tower as well but after climbing to the top of one huge building enough was enough and we probably capped the trip with a glass of vino somewhere. 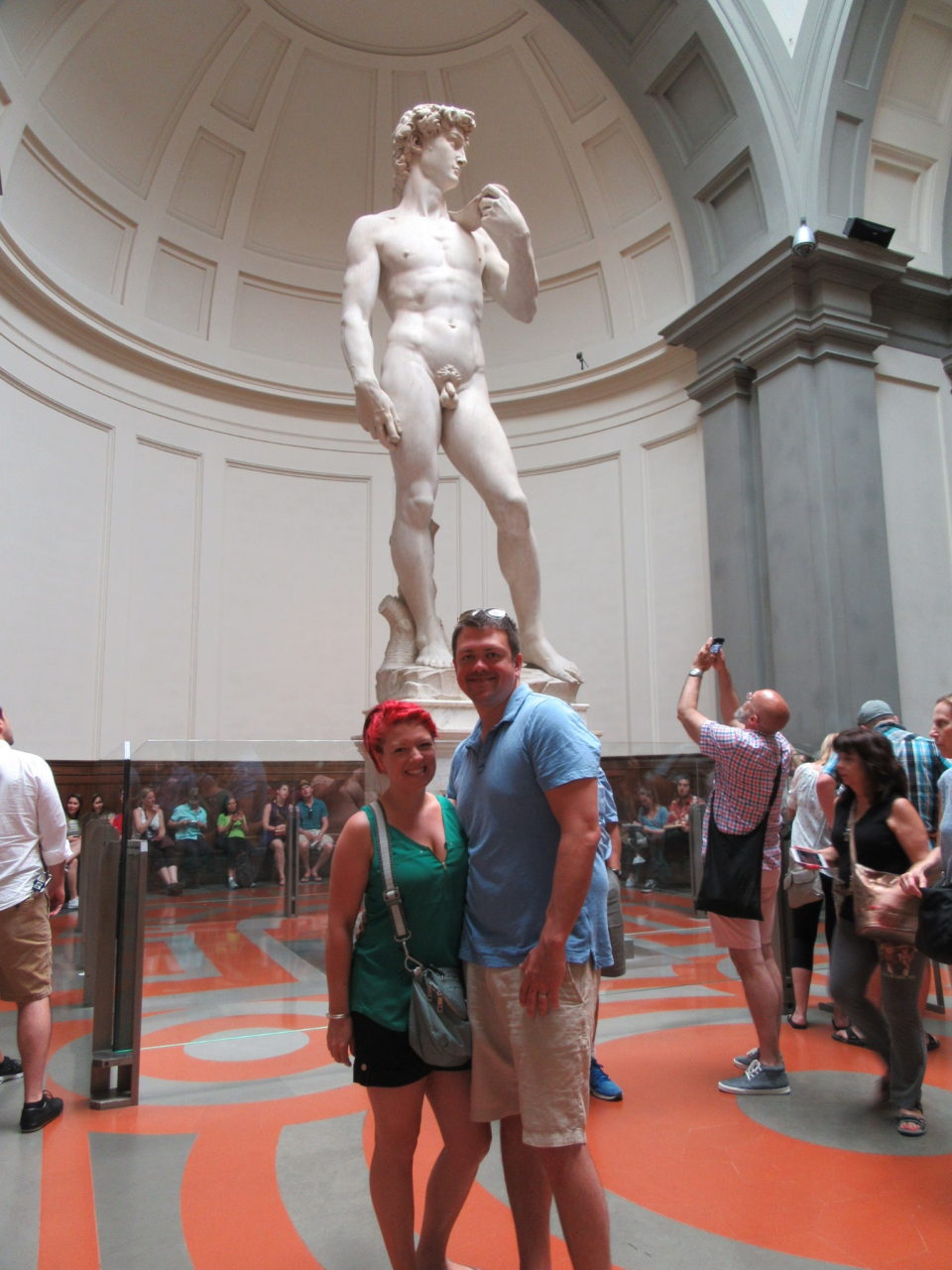 One of the coolest excursions we did on our whole trip was the one we did in Florence.  We rented vintage Fiat 500’s and had a guided self-drive tour up through the hills of Chianti and then back to a private vineyard where we had wine and Aperol Spritz’ and got to watch the sunset from the pool of the private villa.  It was such a cool excursion that I have recommended to anyone I know going there.  The tour guide was great.  He was in his late 20’s, really funny (ladies – really good looking if you are into handsome Italian men…) and had great insight on the region.  He actually informed my husband and I that only tourists used balsamic vinegar, the true Italians never use it more than in desserts.  Check out the tour we did here. 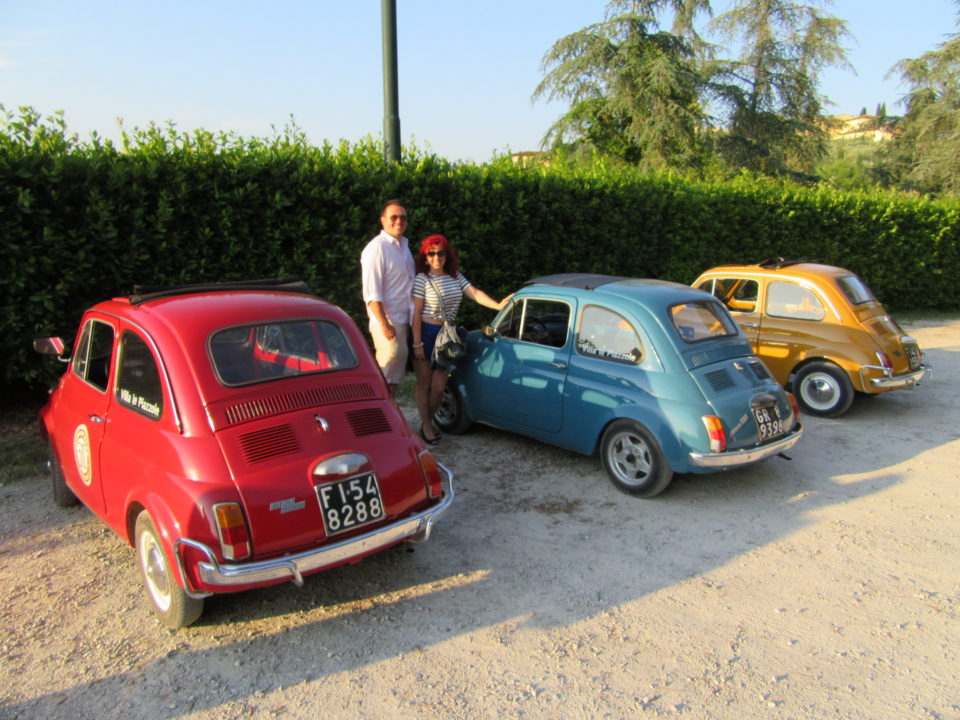 The food there was fantastic.  You would think, of course, you are in Italy, however, I would not say the food in Venice was “fantastic”.  One of the specialities in Tuscany is the bistecca alla fiorentina.  The steak is a t-bone steak that is grilled (we found while we were there it was always on a charcoal grill) and simply seasoned usually with rosemary.  The beef comes from Chianina cows which are large white cows and actually are one of the oldest, largest and heaviest breeds of cattle.  We had steak almost every night we were there.  The one interesting thing we noticed in Florence is the bread is not that great.  We looked it up and we found out why.  In Florence they typically don’t use salt in their bread recipes.  No wonder it tasted so bland.

Another thing we learned quickly in most of the cities we visited in Italy, vino della casa (house wine) is usually always good!  You can save yourself the money of buying expensive bottles of wine and opt for the house wine and you most likely will not be disappointed.  Most times it is cheaper than your bottle of aqua!

Florence truly is one of those cities in Italy that broods romance.  From the old architecture, to the sunsets, to wine country and the deep rooted history this is NOT a city to miss if you plan an Italian adventure! 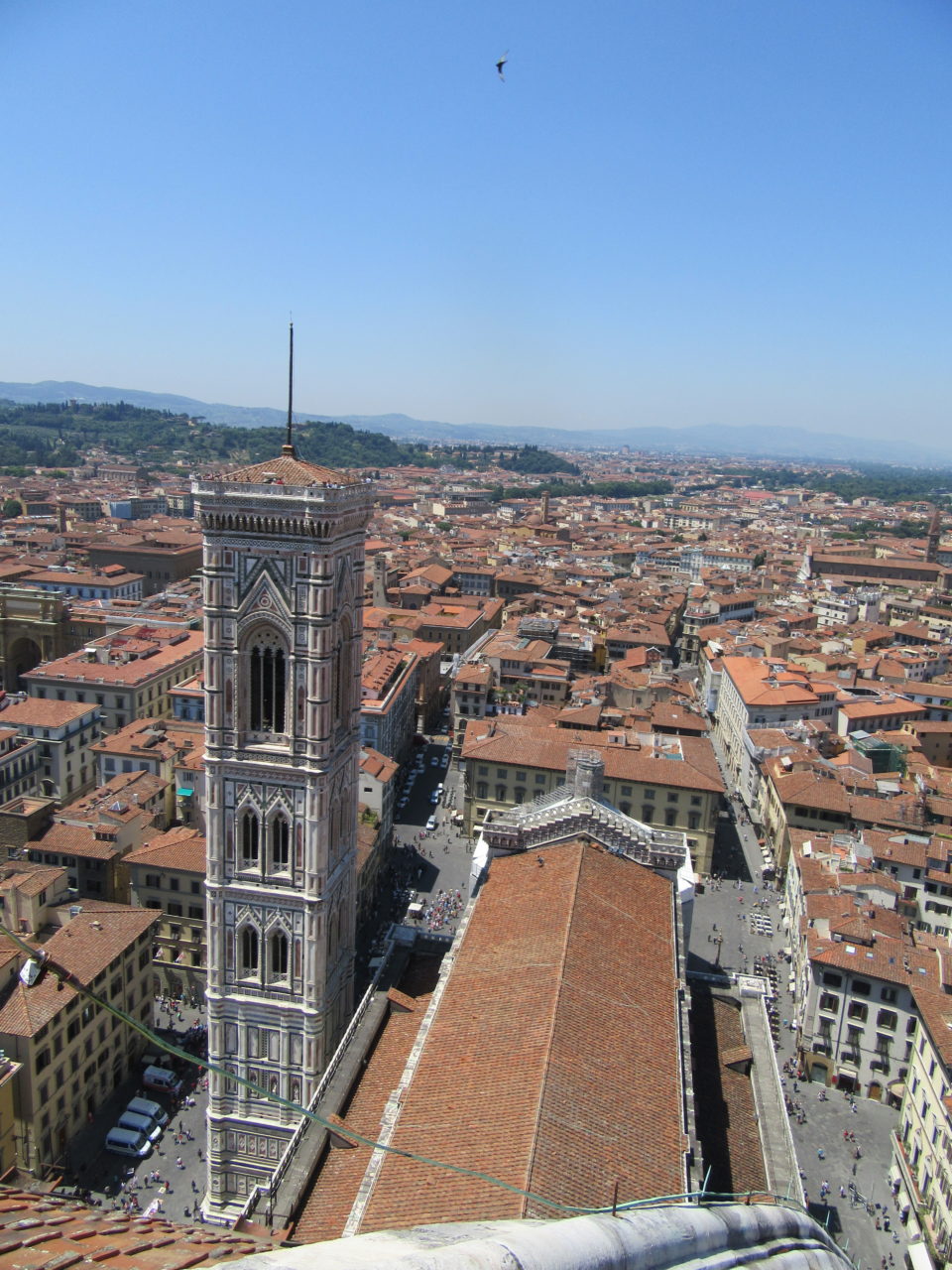 where to eat in florence: 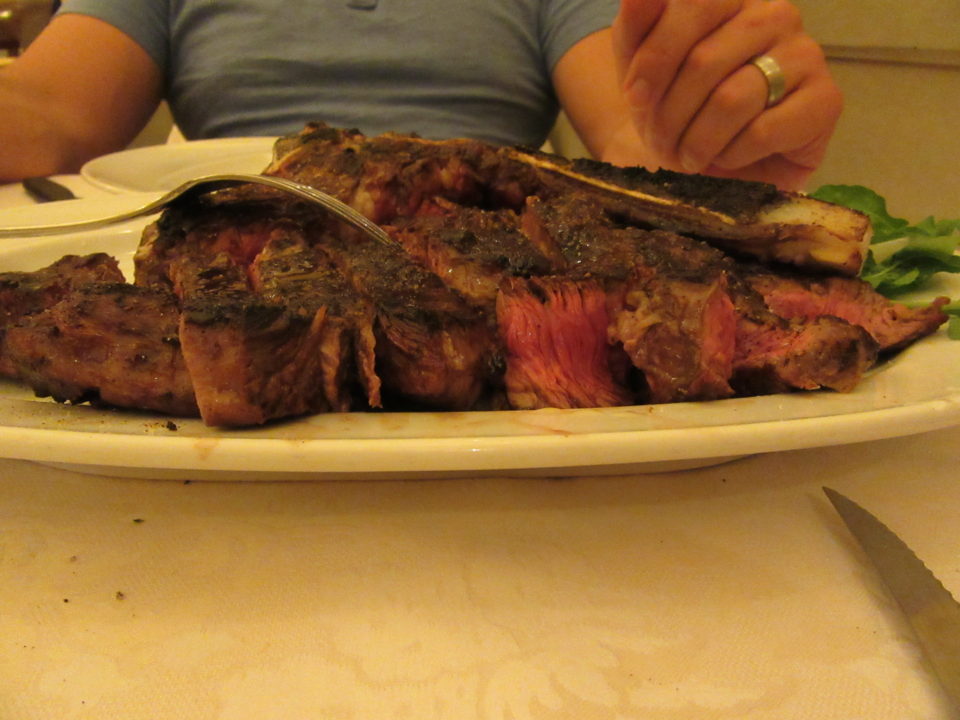 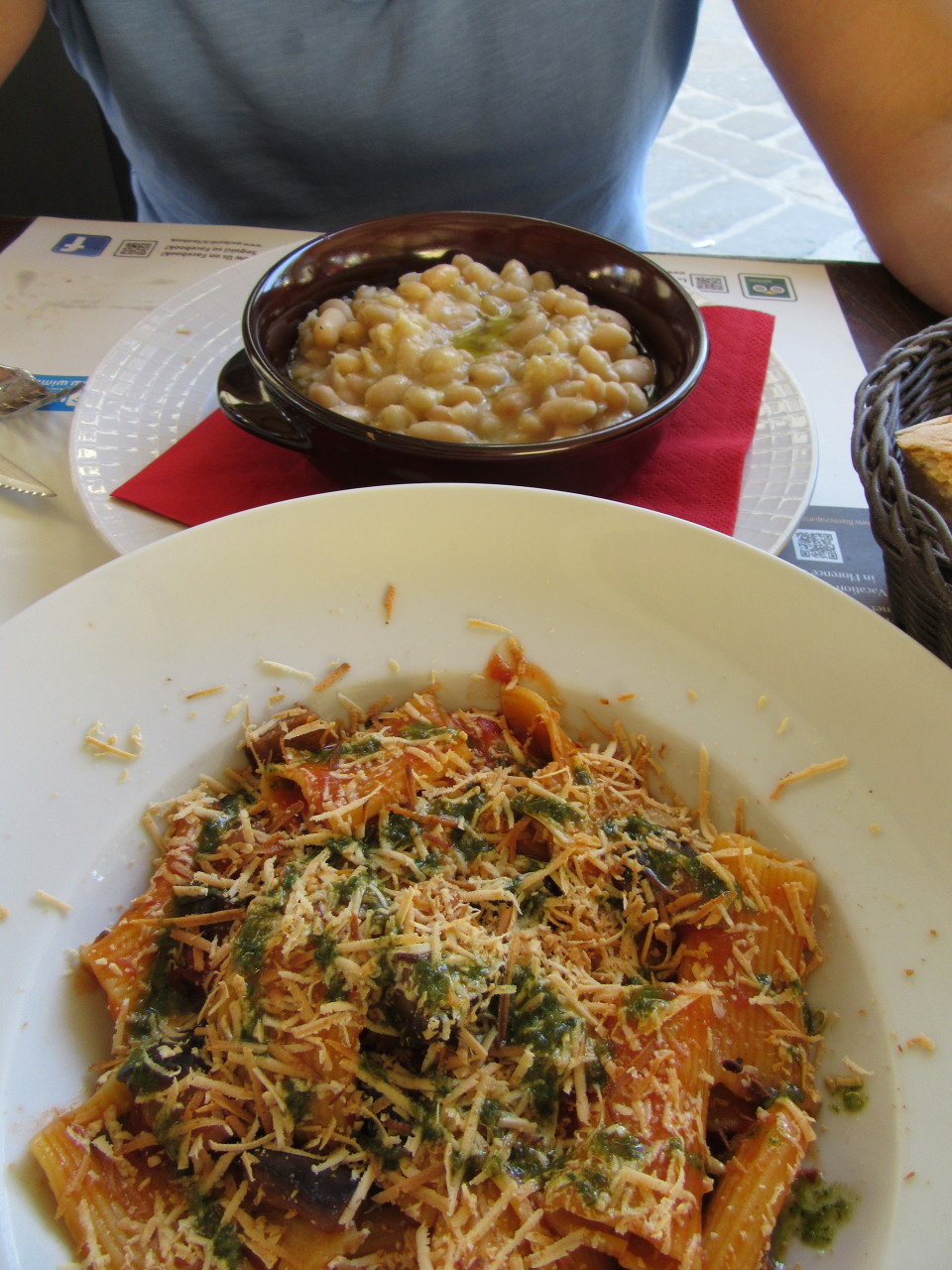 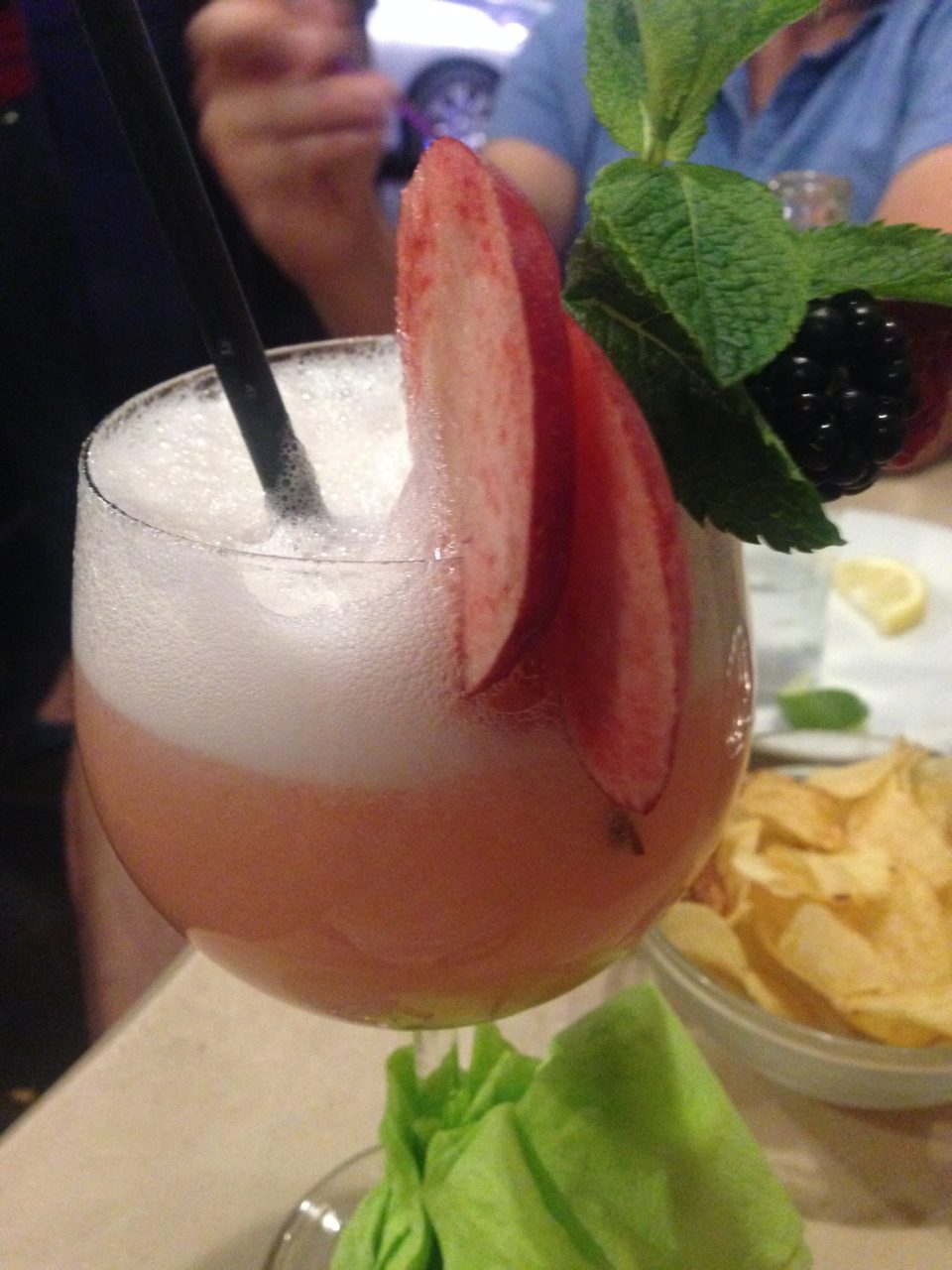 2 thoughts on “eat, breathe and fall in love in: florence”