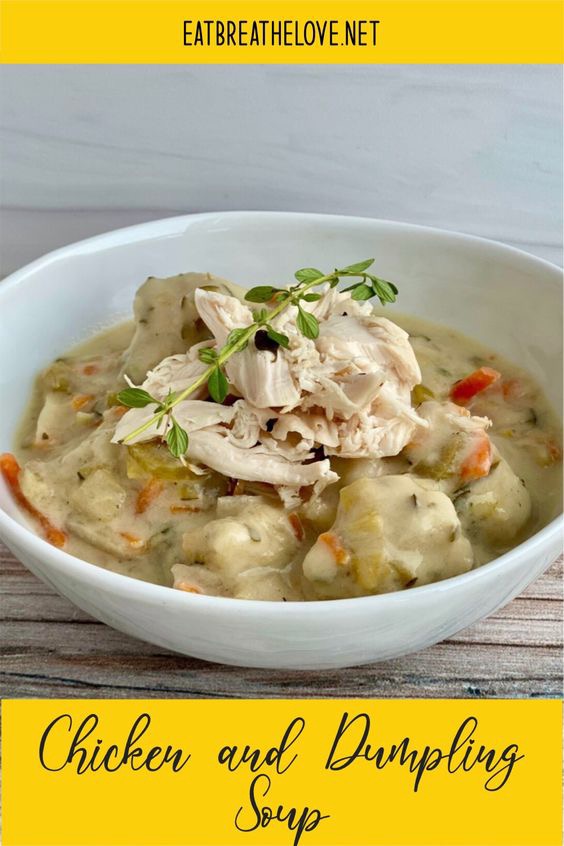 It’s getting colder which means I start craving more comfort food.  My husband was doing a five day fast (check out Prolon if you have not heard me mention this before) so I was at liberty to make what I wanted over the weekend.  He doesn’t appreciate thick creamy soups as much as me so I thought it was a perfect opportunity to make a soup I absolutely love -chicken and dumpling soup.

All about the dumplings 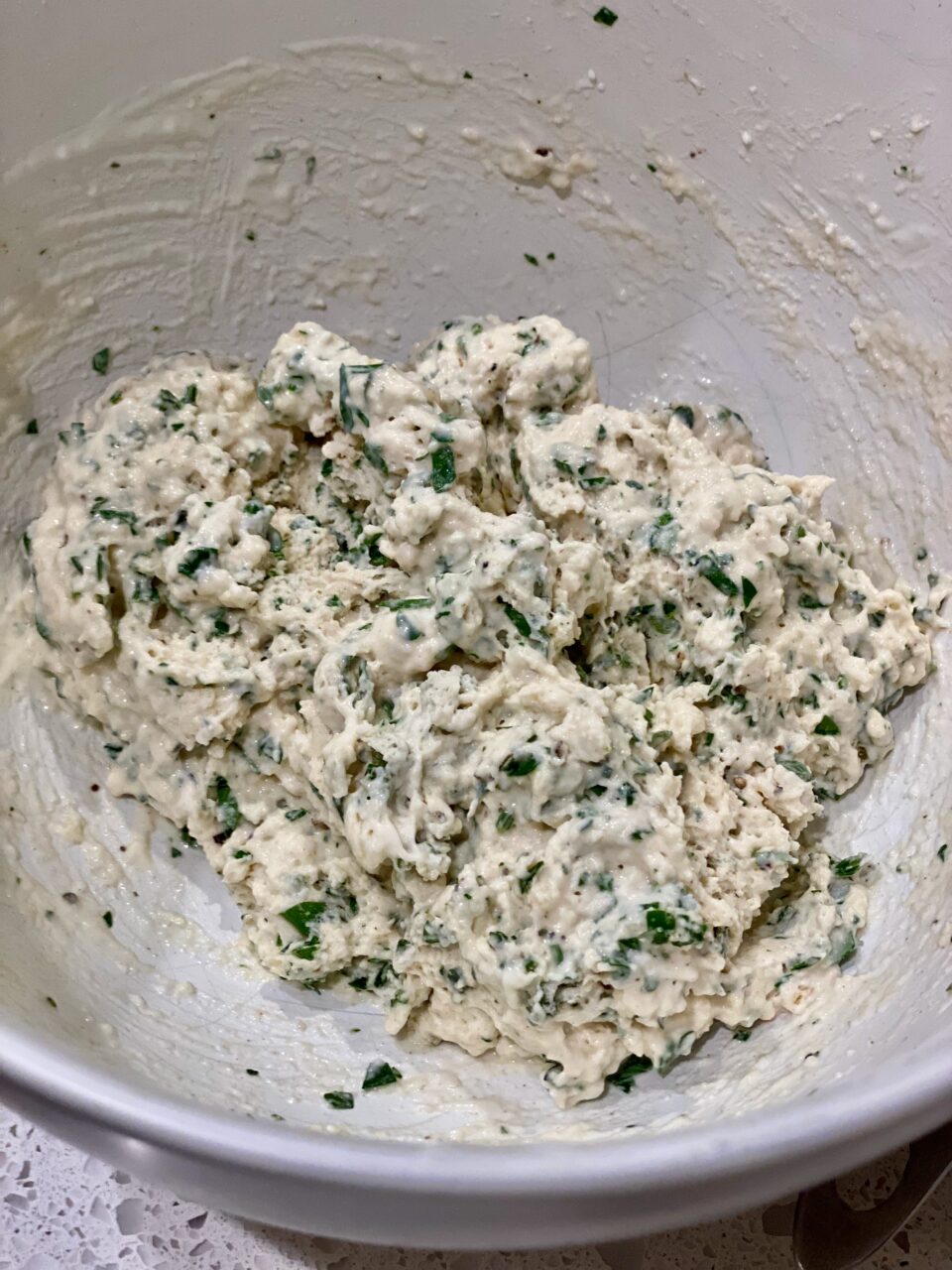 I used to struggle with the dropped dumplings because they were so big.  I found that the middle was always really dense and they were just kind of hard to eat.  So I found the problem really wasn’t the dumpling dough.  The problem was the size.  So now I make little tiny dumplings instead.  I use two teaspoons to drop in small amounts of the dumpling dough.  The dumplings will swell and puff up while they cook in your soup broth so it’s ok if you only drop small amounts.  When they are done cooking they wind up being the size of gnocchi.  Then the dumplings are easy to consume and you don’t have to chop up your soup!

Additionally I use a ton of fresh herbs in my dumpling dough.  The combination of buttermilk and thyme go very well together.  I also add in Italian parsley and chives.  I have added cheese to my mixture before as well but I forgot to buy it at the store so this time did with out.

The key to the best chicken

I have mentioned before in my chicken wild rice soup [3] recipe I found the secret to the best chicken for chicken soup ever.  By found I mean I watched the legend Ina Garten do this and have never looked back.  Roast your chicken in the oven!

This now is my go-to any time I am going to make a soup that I have chicken in.  Yes you definitely could save time and buy a rotisserie chicken.  But if you are going to cook it at home for the love of something – stop poaching your chicken.  I promise this will taste a million times better. 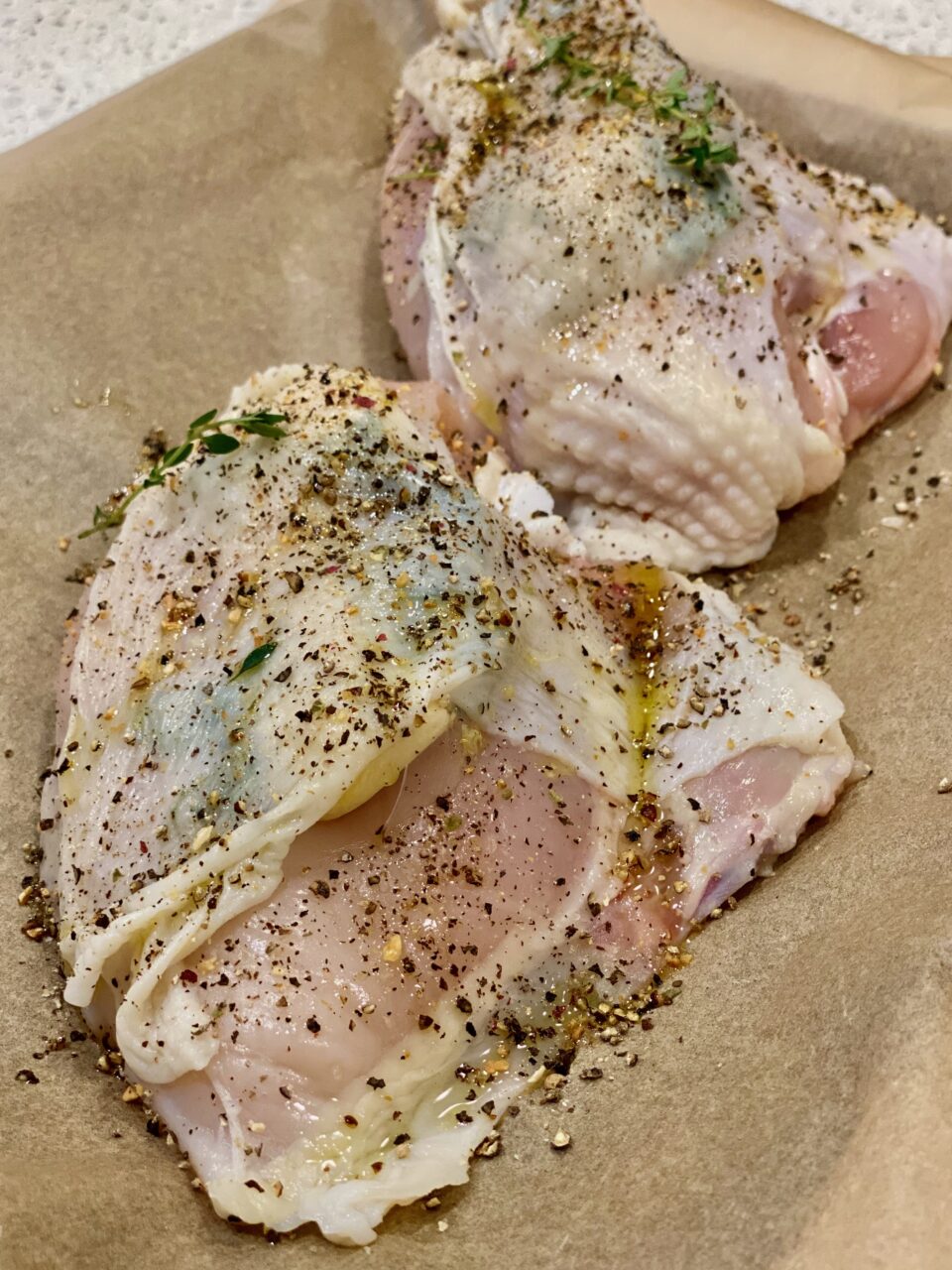 First I start by seasoning my bone on skin on chicken breasts.  And I don’t mean the top of the skin.  I season the INSIDE of the chicken.  How you might ask?  I gently remove the skin away from the breast.  Not completely, you just want to separate it enough so you can “stuff” something in the little pocket.  Garlic cloves are a must.  I usually use 4 whole cloves of garlic on each breast.  Then comes the herbs.  It depends on what I am cooking, if my soup is more rosemary heavy I will use that.  If I am making my Chinese Palace soup [4] I will hit it with some ginger and garlic.  In this version though I used thyme leaves. 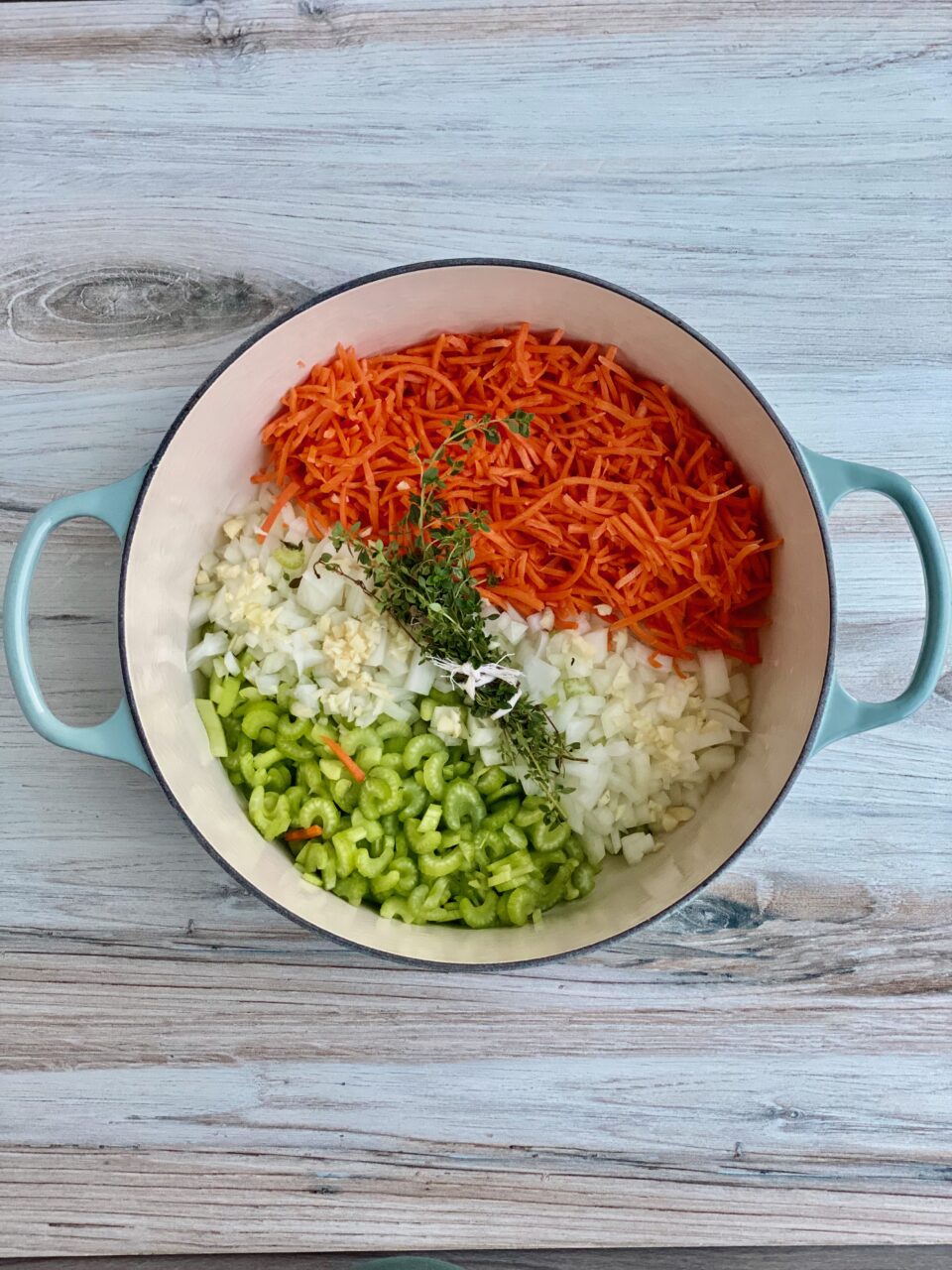 Once your chicken is stuffed, season the skin LIBERALLY with salt and pepper.  Err on the side of “is this too much?”.  I assure you it won’t be.  Then I drizzle the chicken with a little olive oil and start the roasting process.  I put the chicken in the oven at 425 for about 12 minutes so the skin can get really crispy.  Then turn it down to 400 for the remaining 20-25 minutes.  If you don’t have a meat thermometer I would strongly suggest getting one.  You want chicken to be at least 165.  Also I find that cooking these chicken breasts depends on the size.  Some times it takes 20 minutes additional, sometimes 25.  But you don’t want to get sick nor do you want to cook your chicken too long and dry it out. 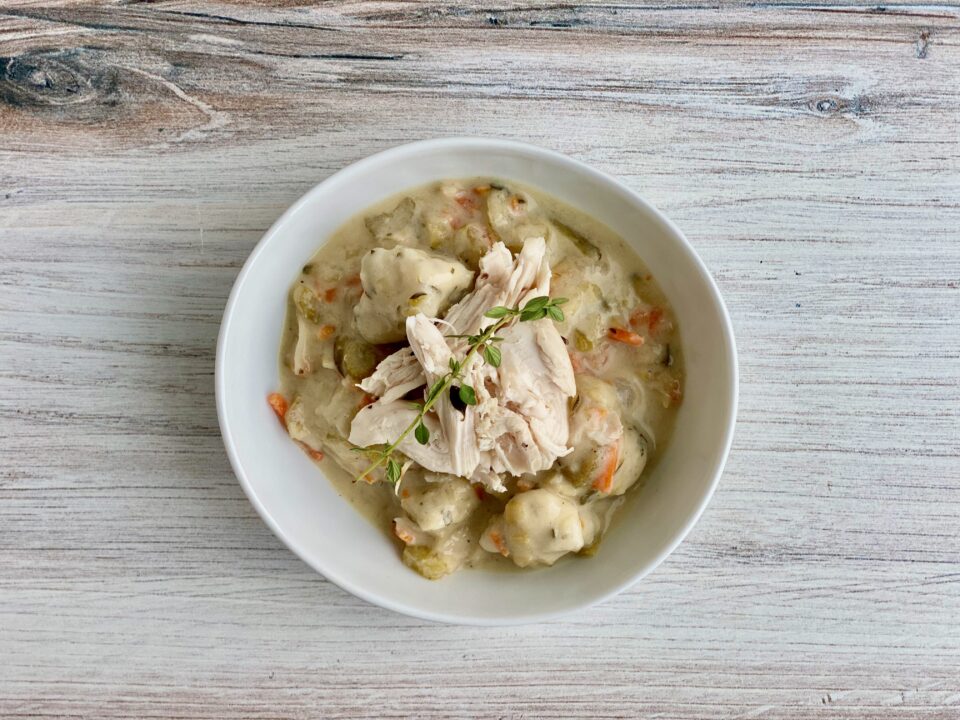 Bringing it all together

The rest of the chicken dumpling soup is super simple.  It’s a ton of veggies, some wine and fresh herbs all cooking together.  I like to multi task and put the chicken in the oven while I cook the soup so everything comes together at the same time.

If you were team rolled dumplings previously this drop dumpling recipe might just win you over.  So the next time you are craving chicken and dumpling soup be sure to try this recipe out. 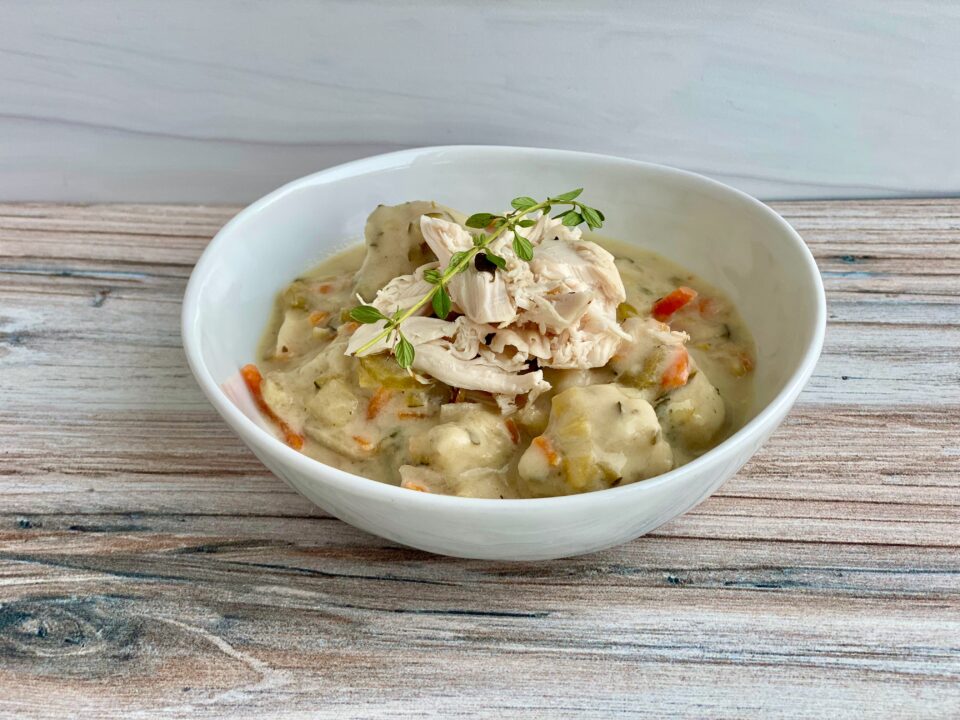 FOR MORE RECIPES BE SURE TO CHECK THESE OUT:

This creamy chicken noodle soup [6] is another comfort food meal

And remember, if you try this recipe be sure to rate it and leave a comment below and let me know how you like it. Or tag me on Instagram! [7]

These light and fluffy dumplings pair with herb roasted chicken for a flavorful pot of comfort food.