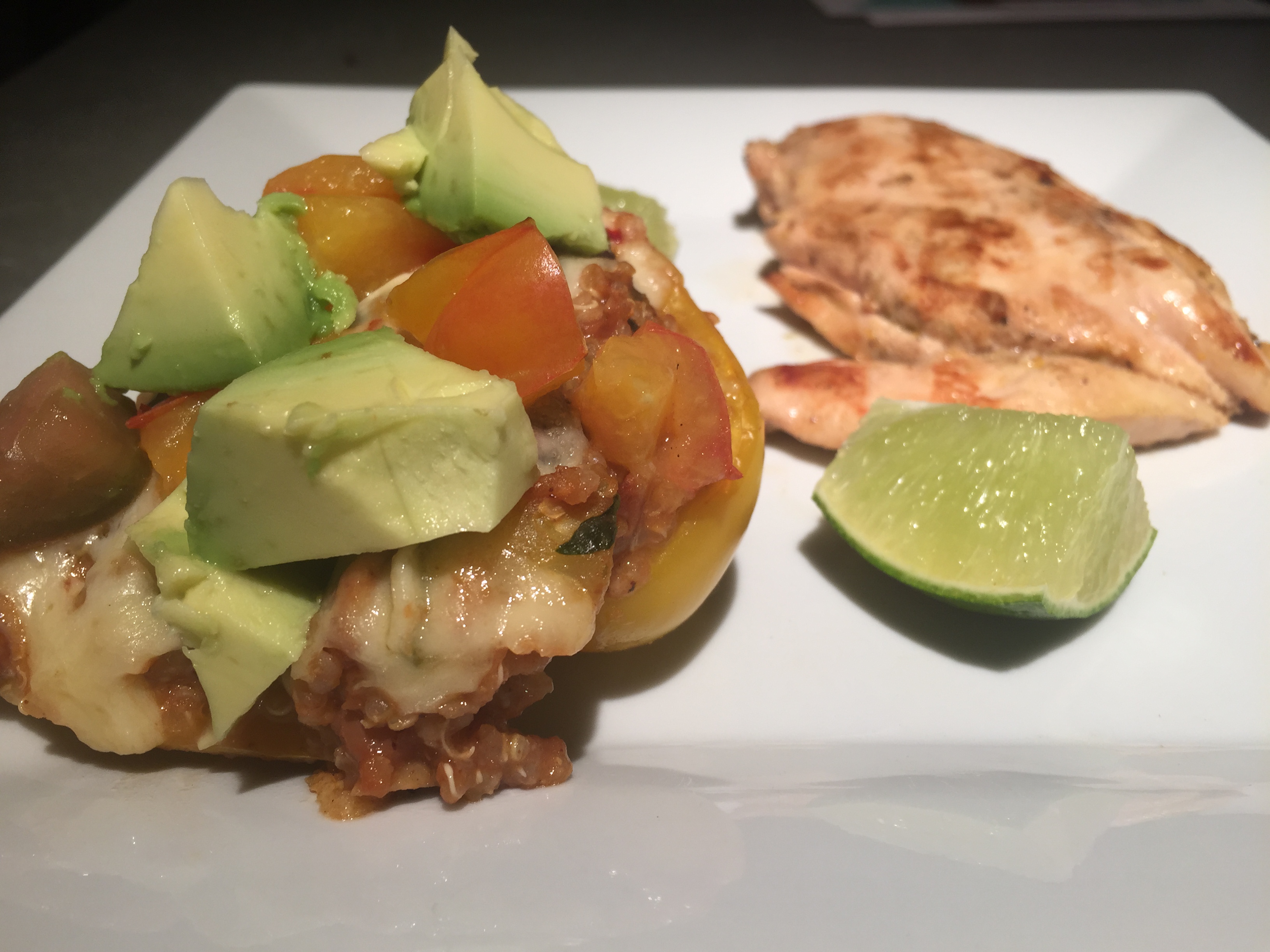 [dropcap]M[/dropcap]y husband loves anything and everything southwestern inspired.  Especially tequila and limes.  After being gone all weekend to a “quick” trip to my home town (7 hours north of Detroit, yes, in the SAME STATE…. google Marquette) and eating out or not eating “our” food I decided I would make him something he would love.  He always kids around with me that people in the Midwest “hate salt” and we don’t know what flavor in our food is.  I would agree with the former.  I in turn kid around with him that in the south they eat such basic food they have to season the hell out of it just to make it edible.  Which isn’t terribly far off base.  In Louisiana they learned how to get by on the basics, rice, beans, mirpoux, and to make it taste really good they seasoned it.  If you go to Mexico it’s the same thing, rice, beans, vegetables, corn so you need to flavor these rather boring basics.  When we were in Italy our waiter was telling us a story about this beef stew they made with a TON of black pepper and they used that because back before refrigeration the pepper would help mask the taste of the meat going bad.  Yum….. My husband has taught me how to eat spicier food and I have taught hm you don’t need a pound of salt in everything you make.  Marriage is a balance right? 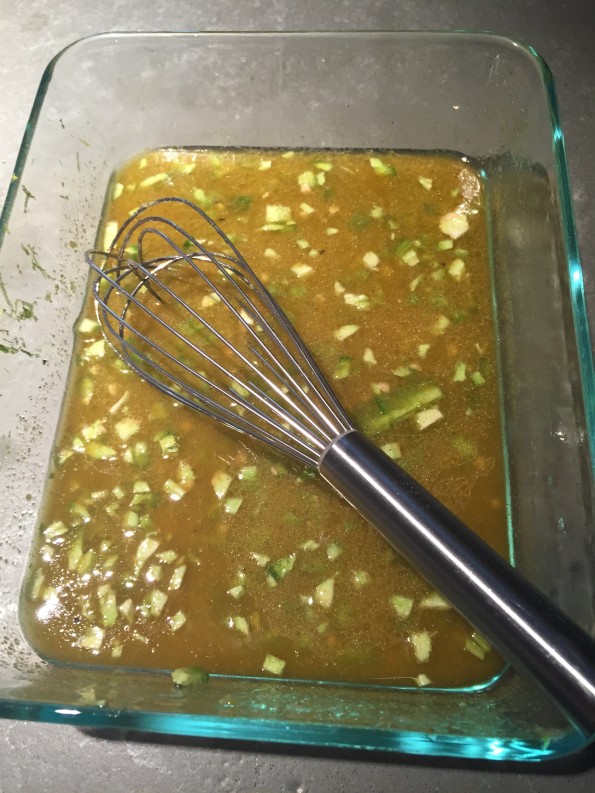 Knowing that anytime I use southern inspired ingredients he will be thrilled I decided to play around with some of my basics.  I make grilled chicken a million different ways.  He loves margaritas and tequila and lime go together so well.  I feel like the key to every good marinade for chicken is a fat (some kind of good oil), an acid (vinegar, citrus, etc) and spices.  Also the longer you have to let your meat marinade the longer the acid has to break down the meat and really tenderize it.  In the margaritas he makes there is also triple sec which is an orange based liquor.  I decided to use tequila, the juice and zest from limes and oranges, garlic, cumin, and of course, some jalapeños to soak my chicken in.  Unfortunately after sitting 7 hours in the car we got home kind of late but this marinade would be perfect to make in the morning or even the night before and let your chicken soak in it.  We also share a difference of opinions on what chicken we like.  Marinating and grilling makes that easier for us.  We can do chicken breasts for me and thighs for my husband.  The one key I have found to grilling chicken and not having a tough exterior and a raw center is POUND OUT your chicken breasts.  Make them the same thickness to promote even cooking time.  Also to reduce cooking time pound to about a half an inch thick. 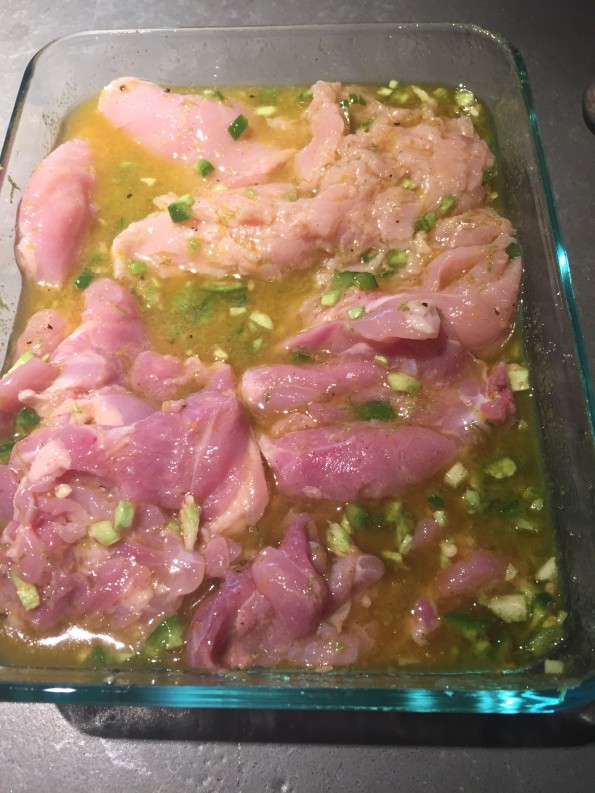 I also make great Italian stuff bell peppers.  Half the time I am too lazy to actually stuff the bell pepper back and bake it in the oven that I just make the filling for the stuff peppers and eat that on its own.  (it seriously saves 20 minutes at least!)  Since I was making a southwest inspired dish I wanted to do the same with my sides.  I combined a ton of vegetables (I know you are SHOCKED!), beans and quinoa.  Quinoa has become my go to carb especially during the week.  It’s super high in protein and really easy to make.  Lately the poblano peppers have been so fresh too.  I like roasting my peppers to give them a nice smoky taste from the grates of a grill or the oven.  If you don’t feel like spending the time to roast the peppers you can buy a can of diced green chilis but it really only takes 20 minutes and the work is minimal.  I needed the oven so I decided to roast them directly on my oven grates.  Once your peppers are done you place them in a paper bag (I just use a brown grocery bag) for 10 minutes to cool and loosen the skins.  Then you can peel the skins off, scrap out the seeds and dice them up for whatever you are making. 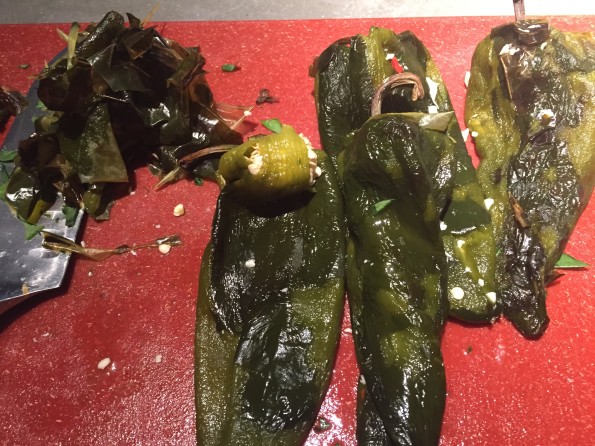 I have said before once you get a concept down and then learn what spices go well together it’s easy to play with the method.  You can do stuffed peppers really any ethnic inspiration you would like.  You could go Middle Eastern and stuff it with lentils and chickpeas or rice, Italian and stuff with risotto and cannellini beans, the possibilities are endless.  Alternately, if you wanted to make these peppers as a full meal you could cook any ground meat of your choice, beef, bison, turkey, maybe even some chorizo and make the peppers your main dish.  I encourage you to play.  Worst case scenario, you don’t like your food and you order take out! 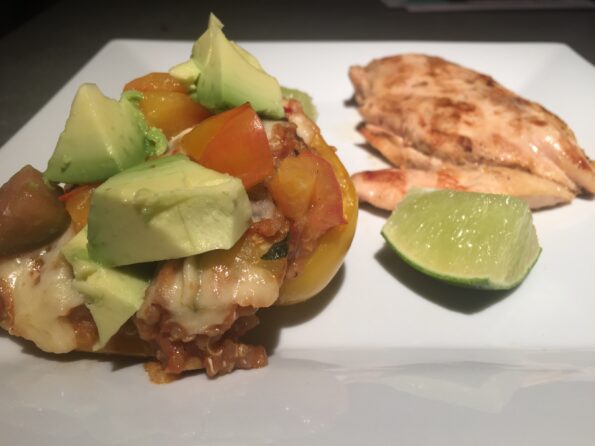 2 thoughts on “tequila and limes…..and chicken”