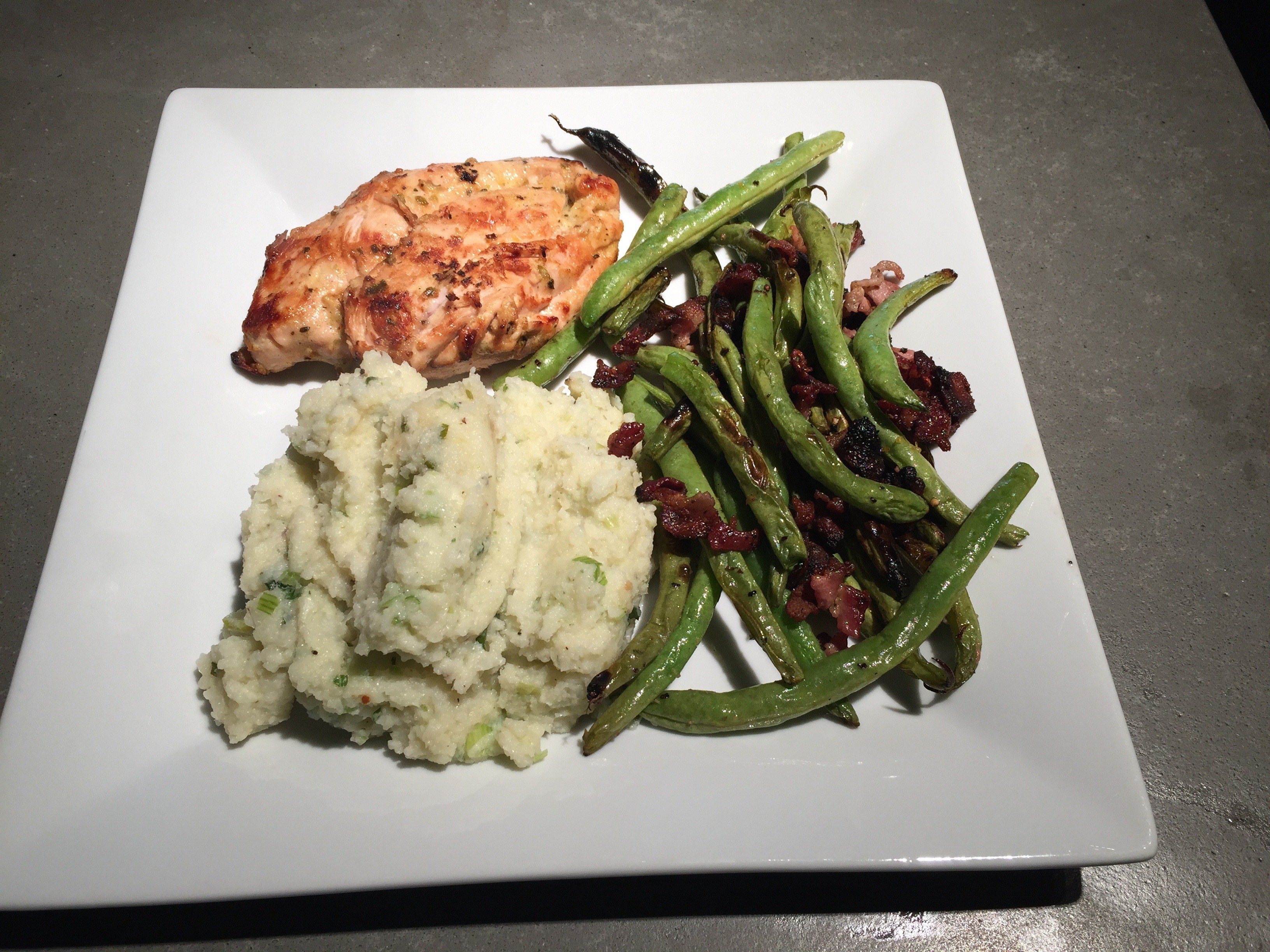 Sundays at my house are typically “Soup Sundays”.  Even in the summer.  I can eat soup when it’s 100 degrees out and it doesn’t bother me.  I mainly make it because then I have a huge pot for leftovers for lunches for the week.  However, this past Sunday I really didn’t feel like soup.  Since it was nice we decided to fire up the grill and make chicken.

Everything is better with bacon

I remember being little and going out to my grandma’s house.  She had a HUGE garden.  I remember one summer as kids my sister and I had an entire day filled with green beans.  We picked a ton of green beans from the garden, then went inside and snapped them, canned them and had them for dinner.  After a whole day of green beans I didn’t want to see them again for a long time.  But not anymore!

To save a dish I wanted to make green beans on the grill.  And add bacon.  But bacon on the grill can be tricky.  If you have too much of the fat drip down onto your grates it can cause a fire as that grease burns.  I figured maybe if I chopped the bacon up small and mixed it in with the green beans that would help mitigate that from happening. 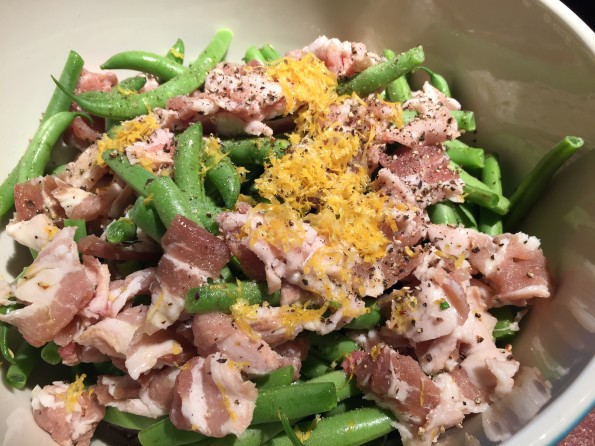 Since the bacon would add a lot of flavor the rest of the flavors are kept simple.  I drizzled a small amount of olive oil (you don’t need much because the bacon fat will start to melt however, I wanted a little to get the beans going and prevent from sticking to the grill pan), salt, pepper and the zest of a lemon onto the beans and mixed that in a bowl with the raw bacon slices and then threw them on a grill pan.

Abercrombie and Fitch and Chicken?

I am a child from the 90’s.  When Abercrombie and Fitch was cool and just coming out.  Abercrombie soon started coming out with their risqué catalogs with half naked girls on them but the catalog had more than clothes and skin.  It had food recipes!  I remember showing my dad a recipe for grilled chicken kabobs that was so good.  I never remembered exactly what was in it, I just remember the combination of lemon and oregano.  To this day I usually use some kind of concoction similar when I marinate chicken for kabobs. 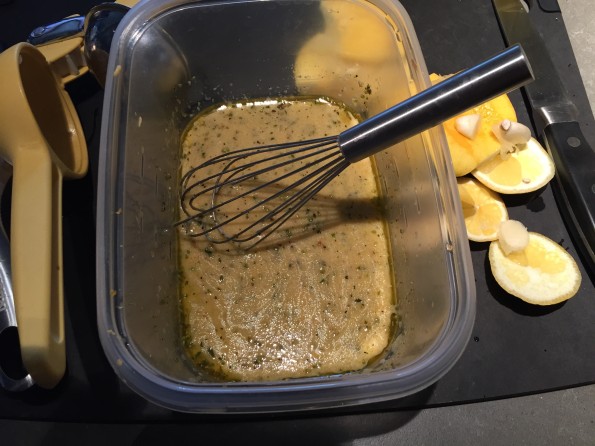 Some tips for a successful grilled chicken: 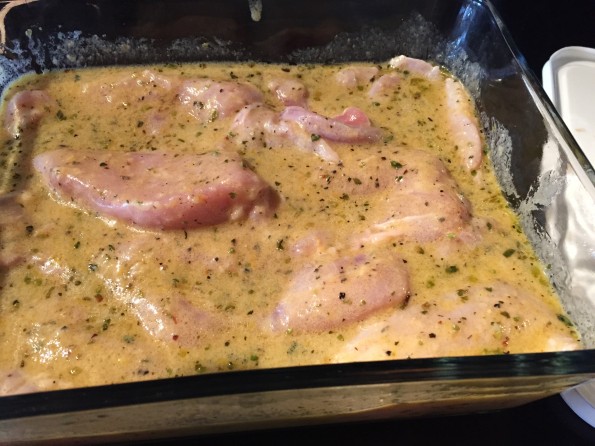 I could seriously eat potatoes every day.  I love them.  They are one of my favorite carbs.  I could give up bread all day long, but I could never give potatoes.  I really wanted another vegetable to go along with dinner so I decided to make a carb substitute and make mashed cauliflower instead.

The consistency of mashed cauliflower is ALMOST like you are eating potatoes.  If you season the cauliflower the same way you would a potato it’s a great fake out.  I make potatoes a million different ways.  I like to mix up what I mash in with them or how I prepare them.

My favorite simple mashed potato is my version of a sour cream and chive mash but I use Greek yogurt and scallions instead.  The key for the scallions is to actually sauté them in a little butter to soften them up.  Then I add them to the pot with the steamed cauliflower.  If you have an immersion blender it helps get all the big chunks out of the cauliflower for a more whipped potato texture.  Also use a strong flavored cheese like sharp white cheddar – then you can actually use less of it! 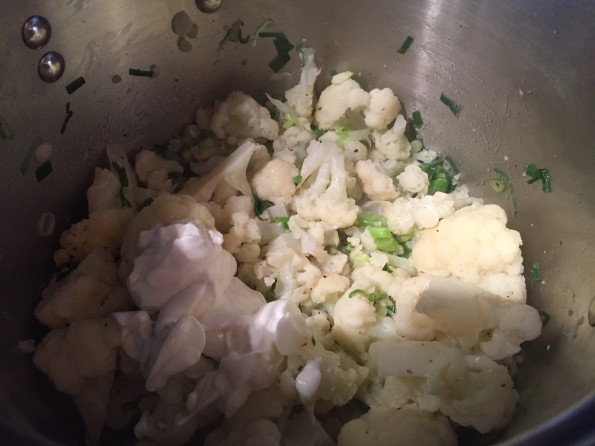 This is a perfect meal for the summer on the grill when you want to pretend you are getting the same comfort from a carb loaded meal. 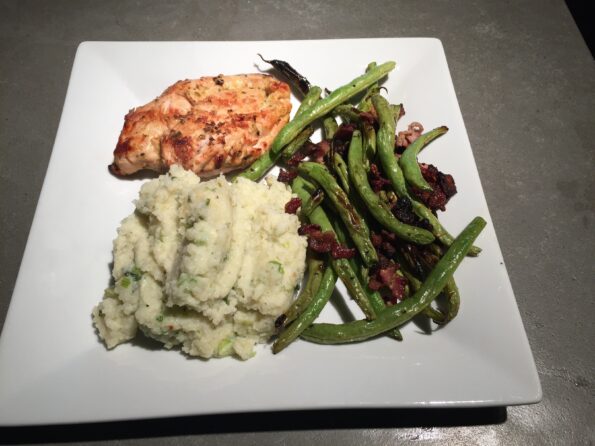 For the green beans