[dropcap]I[/dropcap] remember seeing a commercial for either Chili’s or Applebees before.  They had this cheesy chicken skillet that looked so good.  The base appeared to be mashed potatoes then they were topped with fajita veggies and chicken.  To finish the dish they topped it with cheese and melted it.  Now if you have read a few blog posts of mine, by now you are probably thinking “she wouldn’t eat at either of those places!” and you are correct.  I wouldn’t but the commercial did the job, it made me hungry.

When you look at the nutrition facts for most meals at chain restaurant they are very unhealthy.  Furthermore, they often times are loaded with processed foods.  When I was in high school I worked at Red Lobster.  I remember seeing most of the food pre-portioned out coming straight from the freezer and put back on the stove to heat up.  No thanks.  But this dish isn’t anything complex and was actually really easy to replicate.

Since I have never had this dish I just conceptually threw something together.  We have been trying to cut back on carbs during the week so instead of potatoes I thought I would make a cauliflower mash.  Which is really easy to make.  They were out of fresh cauliflower so instead I bought 2 bags of frozen florets and realized I will be using frozen more often now.  While normally I spend the time chopping it myself and it actually was cheaper to get the frozen stuff – plus a huge time saver.  Lastly I threw some scallions in with the mash at the end to add to my southwest flavor profile I was going for. 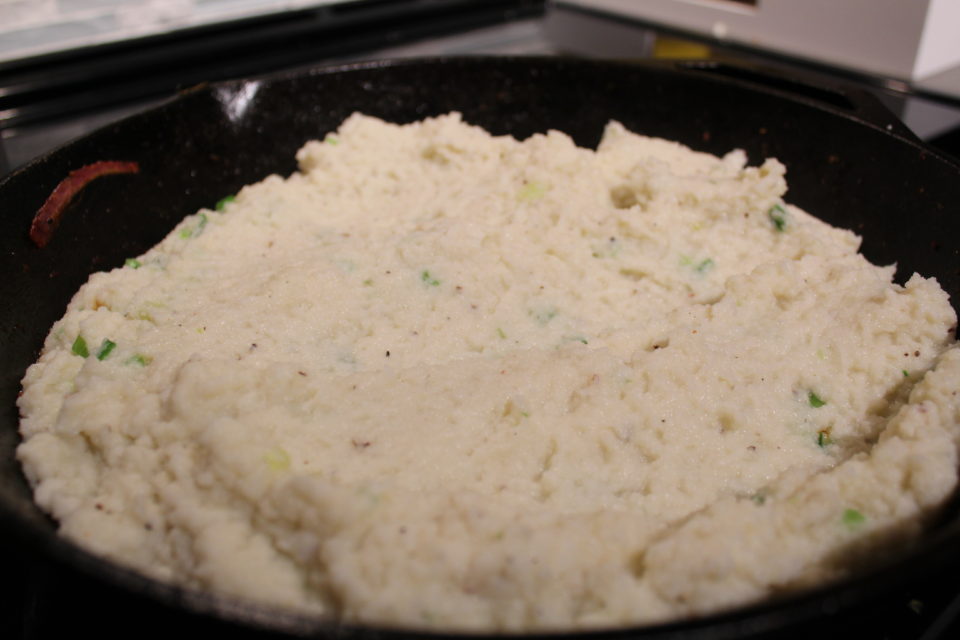 Whenever I make fajita style veggies I always add zucchini to the mix.  Since I like my peppers and onions thin, sometimes slicing the zucchini to be the same size can be a pain.  Apparently I was full of time saving steps that night.  I completely forgot I have a mandolin and that I could slice my zucchini quickly using that tool.  But if you don’t have a mandolin you can just do the work yourself.  However, if you are into kitchen gadgets I would say a mandolin is up there as one of my favorites because it can save you so much time. 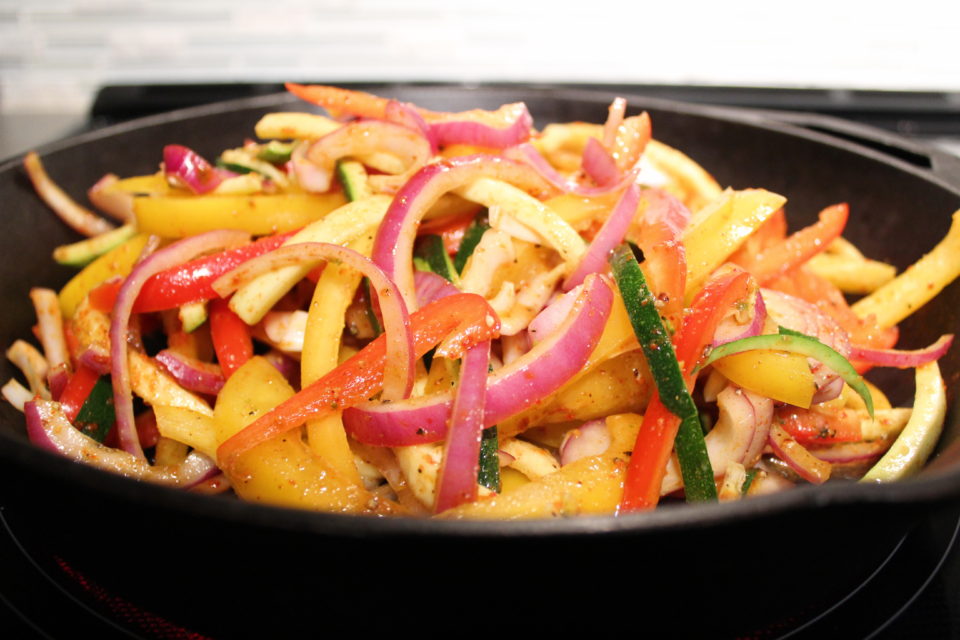 I wanted my chicken to have a lot of flavor.  When we are just grilling chicken for salads and it’s going to have dressing or something else put on it we just simply season and grill it.  For this though, the chicken was going to be a main component of the dish.  Before I went to work in the morning I marinated the chicken in garlic, citrus juices, jalapeños and seasoning.  It soaked in all that good liquid all day long.  Because citrus helps break down your meat it results in a nice juicy piece of chicken.  Which is another reason to marinate if you use chicken breasts as they can tend to dry out.

I used my cast iron skillet because you can put it in the oven.  If you don’t have a cast iron though, any baking dish would work here.  Really the only reason you need your oven is really just to melt the cheese in this dish. 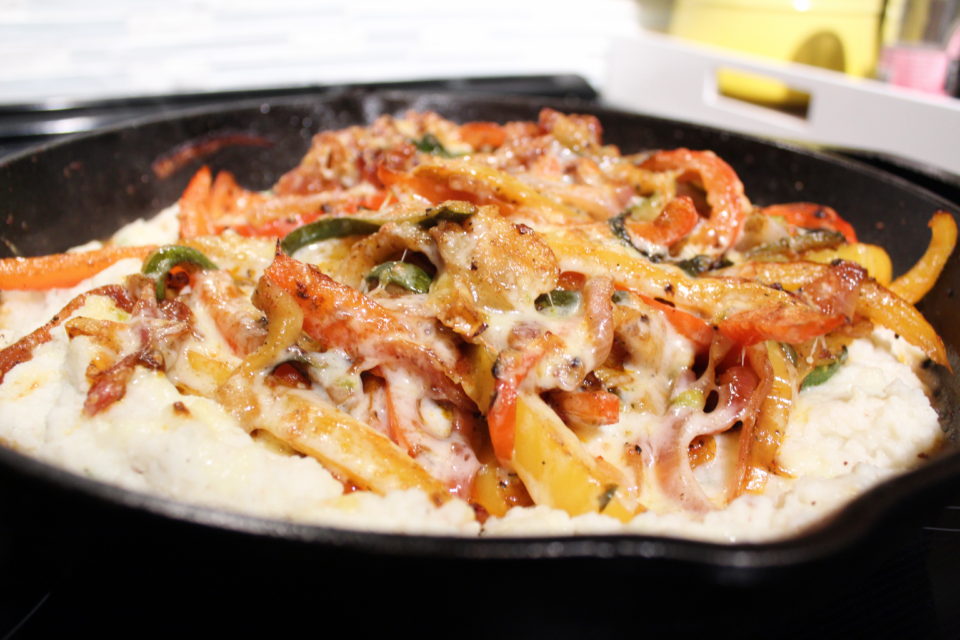 Restaurant food can tend to be unhealthy.  And it can have lots of hidden ingredients and preservatives.  When you can make a restaurant inspired dish at home you can control all of that.  Plus you don’t have to tip anyone but yourself! 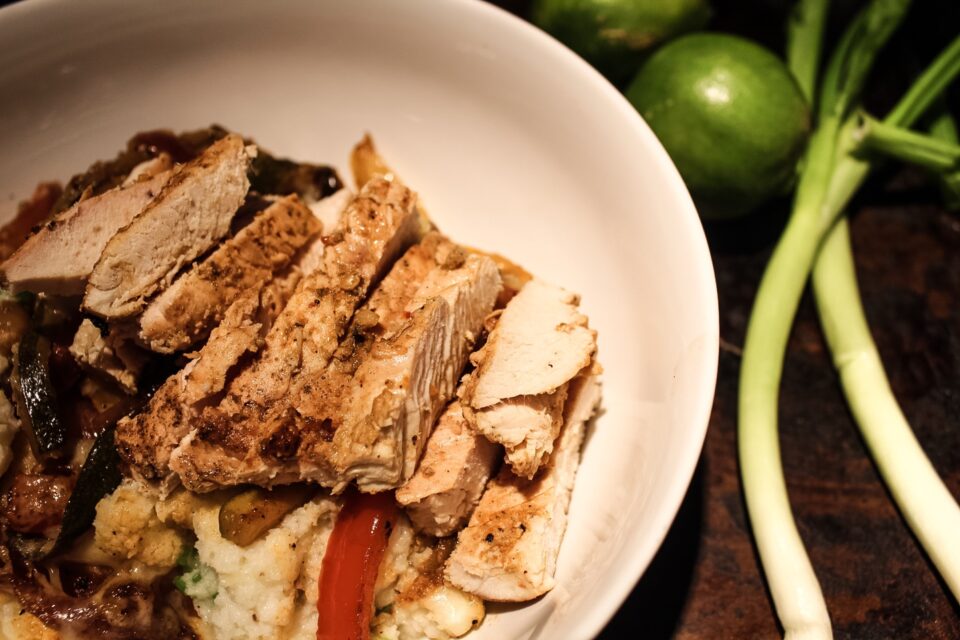