In true Sunday fashion we were sitting around watching playoff football (Go Pack Go!) trying to figure out what soup to make for dinner.  Notice I don’t say “what to make for dinner” but “what SOUP to make”?  Because I make soup seriously every Sunday.  It’s a great way to make a large quantity of healthier food to last me the week so I have a good lunch at work.  Not only does it save money but in most cases, calories too when you aren’t picking up take out. I was craving a beer cheese soup but decided to go a little rouge and make cheddar ale cauliflower soup instead.

While I was perusing through my Pinterest soup board and I saw something I had pinned about Aaron Rodgers making the ultimate Beer Cheese Soup.  Which sounded not only heavenly, but fattening!  Loaded with bacon, beer, cheese and heavy cream which I am sure is delicious but not something I needed to eat for 4 days straight. 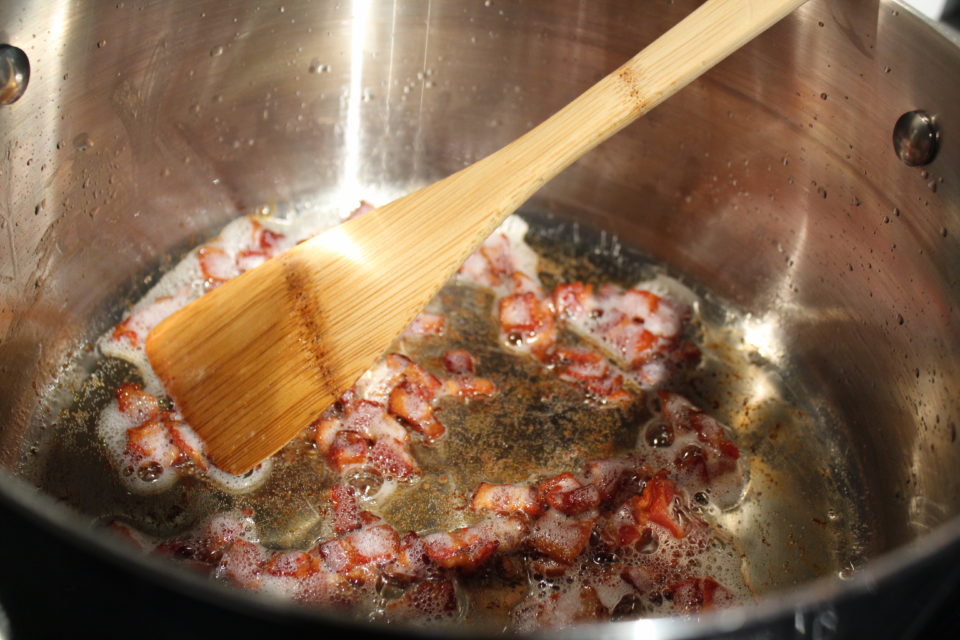 Over the years I have learned my immersion blender is my substitute for heavy cream.  Most of the time I start with chicken or vegetable broth to replace the heavy cream.  When you use the right base (potatoes, beans, cauliflower are all good) and blend with the broth the outcome tends to become a faux cream mixture.  Since life is really about moderation, I still used bacon in this recipe as well as a little cheese.  Also by using a cheese that is strong like a good sharp cheddar the flavor goes a long way so you can use less.

Lately one of my favorite Saturday brunch spots has been having a cauliflower soup on their menu.  To finish it, they top it with chili oil which makes the soup have a nice level of heat.  (Thanks Commonwealth for the inspiration!) Since we had some chili oil at home that we had got at an Italian grocery store (have you been to Eataly?!) so I put it to use.  But if you don’t have chili oil you can just top with a few dashes of hot sauce or just omit all together.  Also if you do like spice, you can always make your own oil by adding red chili pepper flakes to some olive oil and put on the stove on low for 10 minutes to infuse.

Since I was skipping on the cream I decided to whip up a quick batch of croutons to garnish my soup with as well.  Cruotons are so easy to make.  Also, so easy to BURN so be careful when you are roasting them in the oven.  If you have any leftover bread it works great for croutons.  Typically we don’t buy loafs of bread so I like to look for little mini ciabattas or a mini baguette since we only want one serving of the croutons.  Furthermore this prevents buying a ton of bread that will go unused.

While my cheddar ale cauliflower soup probably wasn’t as rich and creamy as Aaron Rodgers’, it was still really tasty and pretty healthy.  Plus the Packers won (THAT night…. we won’t talk about the Atlanta game) so I consider Soup Sunday a victory! 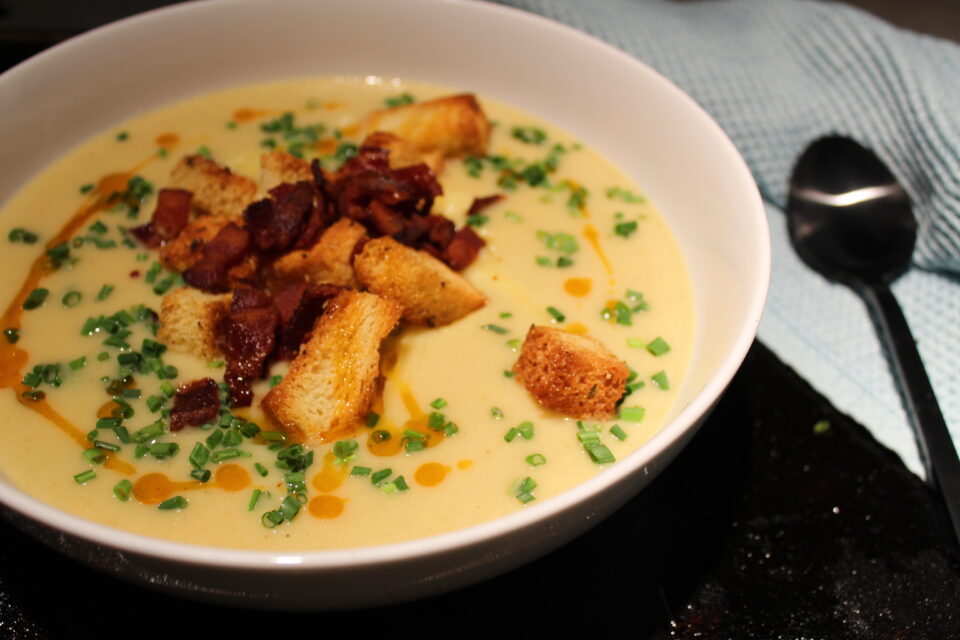